I'll be giving a talk on zoning, its consequences and how it plays out in local politics. Here's a brief outline.

I'll be starting with what I call the "amenities dilemma": whenever some amenity that improves the quality of life is brought into a low-income neighborhood or ethnic enclave, whether it's better plumbing or a nicer sidewalk, it raises real estate values and attracts investment. It's not just a quantity of money that flows into the neighborhood, but the color of money, which is not green. Money in America is white, and it has an affinity as well as a color: it's drawn to more whiteness. Any improvement in a low-income neighborhood tends to whiten it and drive out the color. It's called gentrification and its consequence, community displacement.

Why should money harass the color out of a neighborhood? Is it greedy maximization of profit?

I dislike the use of "greed" as an economic explanation. It implies that there are some defective people who are to blame for what's wrong in the world. That sort of psychological essentialism -- some people are greedy, others not -- leads to a misunderstanding of how economies and societies work, and leads away from any meaningful solutions to its problems. What we call greed may be less affective, personal or psychological than mere opportunity. If there is no opportunity to make money out of some place, thing or person, people are pretty chill about that person, place or thing. It's when there's some kind of opportunity to gain from a place, person or thing that the feeding frenzy begins.

When the Lower East Side was an abandoned slum, it took my landlord eight months to bother to try to evict me for non payment, because the rent was so low that getting the rent or replacing me with another low renter was hardly worth the trouble. Today if I am five days late with my rent, the landlord files eviction proceedings and assesses a late fine onto my rent. Where there's money to be made, the pressure becomes irresistible and fierce.

The amenities dilemma -- leaving the ghetto in poverty preserves the community but ensures their poverty, while improving the ghetto just shifts the community to a new place of poverty (the dilemma was observed way back by Friedrich Engels in his "The Housing Question")  -- is the big problem for zoning designed to create affordable housing. That's what the talk is mostly about. But first I want to look at how zoning came about, what its goals were and are, and how it works.

The origin of zoning

In 1915, Equitable Life built an office tower designed to be the largest such space in the world. Taking up a huge lot, the building rose straight up 38 stories, casting a shadow a quarter of a mile. This was a time before Wall Street was covered with skyscrapers. The buildings there were much more modest and natural light was still available. Commercial buildings were structured to use natural light. Cast iron, favored for commercial buildings, allowed maximal window coverage with minimal structural support. The Equitable Building's shadow instantly depressed real estate values all around it. Landlords and real estate speculators throughout the city were terrified and infuriated, not just over the building, but the possibility that other corporate giants would build near their lots. The real estate industry demanded that the city respond with a permanent fix so that this never happen again. 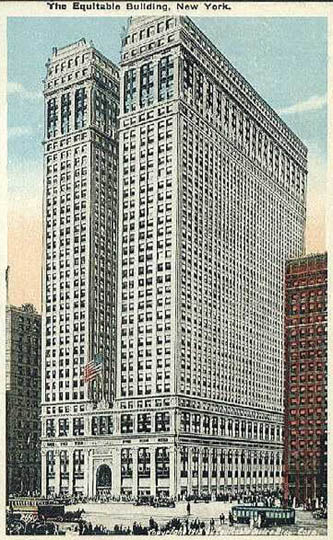 The very next year the city implemented its first zoning law. Note that the city responded immediately. The disastrous 1879 Tenement Housing Act that created dangerous and unsanitary conditions in the ghetto wasn't fixed for twenty-two years. Zoning took a matter of months. The difference? Money and investors vs immigrant labor. Note also that the housing need for the ghetto was dangerous and unsanitary structural designs inducing life-threatening diseases and fire; the needs of the real estate industry were investment.

The zoning had two new requirements. One was a restriction on types of uses so that factories couldn't be built along residences. Factories bring noise and stench and worse, laborers, who are also noisy and smelly that destroy the real estate value of a residential neighborhood. The city came up with the idea of creating residential zones where commerce was allowed but not manufacturing. There'd also be commercial zones where some residences were allowed, and manufacturing zones where manufacturing and some commercial buildings but not residential buildings could be built.

The second idea was a design innovation. Any tall building had to attenuate -- as it grew higher, it had to be more slender. The idea was to prevent the skyscraper from blocking out all the sunlight, while still allowing developers to build big to cash in on rental space. This requirement of attenuation is easily visible in the most familiar and identifiable NYC skyscrapers. The Empire State Building took its design not from any fashion, but from the strictures of the law. In fact, the real estate industry hired an architectural draftsman, Hugh Ferriss, to interpret the legalese to the architects.

These gradual attenuations are called setbacks.

Both of these innovations were specifically designed to protect the interests of real estate industry -- landowners and developers.

Next up, tower-in-the-park zoning, modernism -- design with a social conscience and unintended consequences -- and developmental rights or how gov't creates property and value for the landowner out of thin air.
Posted by rob at 2:32 PM