Here's what's most wrong with bureaucracy. The categories of right and wrong are budgetary items, not human concerns. Where the budget allows for discretion, no process is necessary. Through these little items, a world can be changed without accountability or transparency or process.

I spoke again to a Parks and Recreation deputy about the placement of the ping pong table in Tompkins Square Park to find out what their decision process was. Recall that Parks placed it right smack in the middle of the seating space that is used only by either a mixed group of homeless people or low-income people of color. It was uniformly avoided by the mainstream, the middle-class, the young white gentrifiers. For the homeless especially, this was a space to socialize with the only people who want to socialize with them, who like and respect them, identify with them: other homeless people. Socializing is an essential need for a social species. For some of these folks, it seems more important to them even than a home. The park is public; they have every right to be there. They are not criminal or disruptive; they are not less human than anyone else, or less a part of the public than anyone.

This was the second Parks deputy I've asked about the table. From his answer, it seems no one in the Parks Dept. knows that there even was a second ping pong table. They are in good company. The local Councilmember was not informed of it, neither was the Community Board. The Dept. deputy said that a ping pong table addition is a minor item.

That's evident from the lack of process, consultation with the councilmember and the community. I tried to explain to the deputy that while from the perspective of the Dept. it is minor, it might be an important matter to people, you know, human beings that are supposed to be served by the park and its administration. He responded that this was a minor decision. I tried again to explain that from the Dept.'s budget or definitions it may be minor, but for the people affected, it may be important. He responded, no, this is a minor decision. Then he complained that if the Parks Dept. consulted on every minor decision, nothing would ever get done.

In other words, they are clueless as to what decisions effect important changes in the park because they evaluate major and minor only through the budget lines. Driving the homeless from their socialization space is not a budget item in the Ping Pong Category Line. Social control has found its hiding place in the paper-pusher's pile.

The month before, a different Parks deputy suggested that the choice of placement was intended to drive away the homeless. That certainly is not minor. It's probably illegal to identify a specific, non criminal demographic for exclusion from a park without any process.

So either Parks is clueless or it is conducting gentrification and displacement through unaccountable means. Here's the map I presented to the Community Board. You'll notice the top right section "USELESS" indicates a roughly 2500 square foot space that is not only empty, but unused by anyone. no one goes there because there's nothing there, it's a dead end, it's not in a crosswalk. It's just a large, dead space in a park. It's an embarrassment to the administration. It's large enough for two or three ping pong tables. All it needs is a barrier -- row of benches, say -- to prevent ping pong balls from running into the basketball courts. 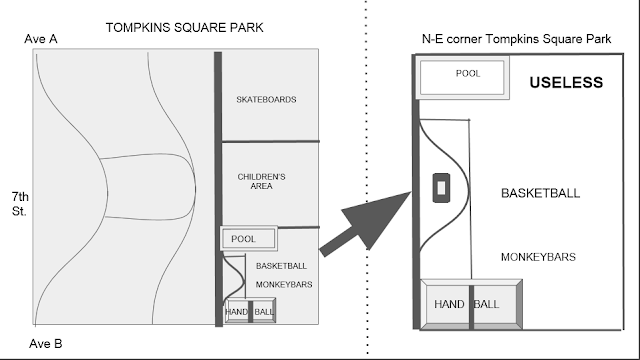