I'm almost done, and saved best for last. Most terra cotta between 1880 and 1901 was cast in the mold of the British architectural fashion of the 1860's, lots of late Italian Renaissance or Mannerist figures, masks and rinceaux. But not all. Much of the terra cotta reflects a German character. New York had the third largest German speaking population in the world after Vienna and Berlin. The local German-speaking newspaper, the Staats-Zeitung, by 1900 had the widest German-speaking circulation of any newspaper in the world. The Bowery Amphitheater, one of the largest theaters in the country, became the Stadt Theater in the mid 19th century where German opera was performed. German culture was prominent throughout the Lower East Side. 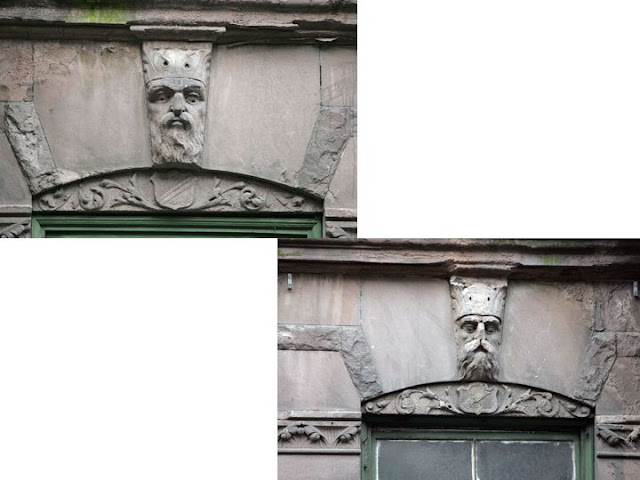 or Teutonic themes out of Wagnerian opera

It's not clear to me whether Brunhilde and Siegfried have distinctive iconographic markers, but between the above masks over the central doorway there's a third mask who wears the winged helmet of Wotan 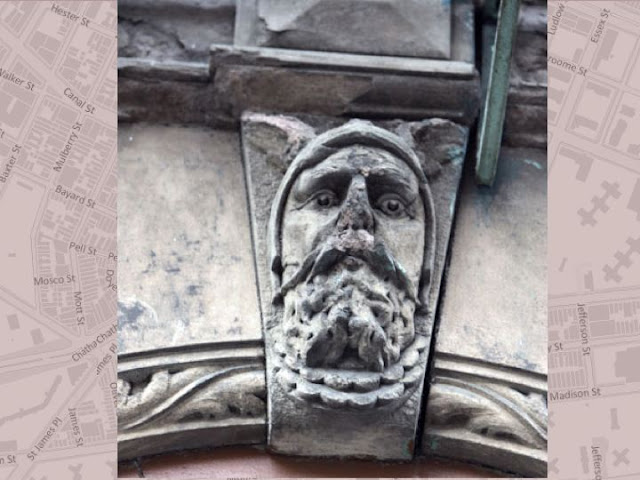 so you can be confident that the viewer is intended to understand that these three masks represent the faces of the heroic figures in the Ring Cycle. 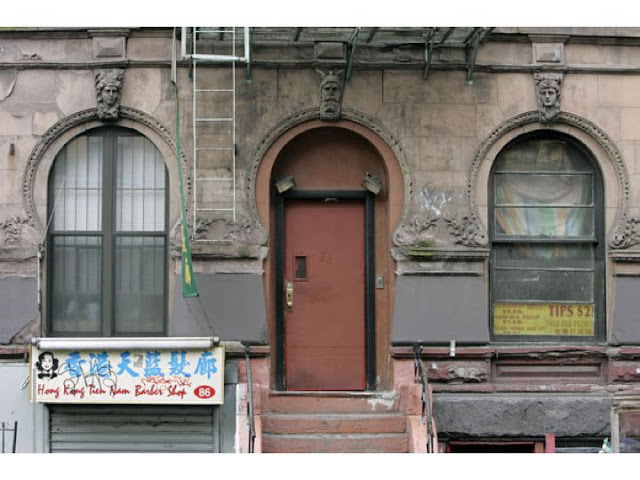 The German-speaking immigrant might well be moved by the stirring music of the opera as he steps onto the stoop, observed by these three.

But when this building was constructed, the Schopenhauerian-Wagnerian moment in the arts had already given way to its reaction. The appeal to human truth in the depths of tortured psychological motives of a thing-in-itself lurking behind appearances and churning out those appearances, was replaced by an aesthetic movement leaning towards art for art's sake, indifferent to truth, art as a surface, reality itself nothing but surface of views, even depths just a folding of a surface.

That's unmistakably represented in this ground floor. Notice that the arches do not match the shape of the windows. They are not structural, nor could an arch of that shape support a structure. The surface gives the impression that there is a structural wall behind an ornamental surface, although it's clear that it's all just part of one surface, one artistic intent. The ornaments, entirely non structural, look a bit like a gift wrap over the building -- the little strip of the structural arch is recessed -- it's deeper than the rest of the wall. The intent is quite clear and it's effective, a kind of trompe-l'oeil in red sandstone and terra cotta. The human emotions portrayed in and by the masks themselves represent the play between the humanly real and the unreal artistic characters in a drama. It's a recursive interplay on the surface of art representing the real by art, a mere surface. The whole is a wonderful thing of charm, elevating the driven emotional psychology of Romanticism into the lightness of the aesthetic movement.

The reaction to aestheticism came from the labor movement and from socialism. And to see why, we'll look at a bank building, one of the greatest and cleverest designed in a decadent aesthetic ideology damned to fall.

One post script: shortly after I gave this talk, the landlord sandblasted the facade, compromising the entire ground floor. It's ironic that terra cotta, which can last for many thousands of years despite rough weather -- Roman amphoras at the bottom of the sea are still intact, would be ruined in a day by a landlord who has not a clue of the ageless value under his nose in his pocket.
Posted by rob at 12:40 PM