From the Bowery Alliance of Neighbors

The information below explains why
several community and preservation groups
are having a press conference & rally to
support landmarking 35 Cooper Square .
Also, please sign the petition:
"Designate 35 Cooper Square a NYC landmark"
http://www.ipetitions.com/petition/landmark35coopersquare/

Tell the Landmarks Preservation Commission to:

The oldest building on Cooper Square , and one of the oldest
buildings of the original Bowery, this charming Federal style
building with the traditional gambrel roof, twin-pedimented
dormers, and large end chimneys also boasts historical and
cultural associations ranging from a direct descendant of
Peter Stuyvesant to much later habitation by Diane DiPrima,
the most influential woman of the Beat Generation.

“…when I first laid eyes on 35 Cooper Square , I knew it was
the fulfillment of all those fantasies of art and the artist’s life,
la vie de boheme. . .it was my dream house.”
--Diane DiPrima, Memoirs of a Beatnik

This much-beloved little building has been both a significant
participant and a surviving witness to New York City history
for nearly 200 years! Under the stipulations of the
Landmarks Law, it qualifies on architectural, historical and
cultural criteria for designation as a NYC individual landmark.
For both historical and cultural reasons, losing this house would be a
significant loss for the East Village/Lower East Side.


Why the need for a rally and press conference?
Responding late last year to rumors that 35 Cooper might
soon be demolished, four community preservation groups
(Historic Districts Council, Greenwich Village Society
for Historic Preservation, Lower East Side Preservation
Initiative) jointly wrote to the Landmarks Preservation
Commission Chair Tierney urging a NYC landmarks
designation. Accompanying our appeal was a strong
support letter from City Council Member Rosie Mendez,
who also met on site with Mr. Tierney.
Despite our efforts, we were denied even a public
hearing on the issue. The stated rationale was that
the building’s facade has undergone too much
alteration, but as historian Joyce Mendelsohn points
out in her reasonable, well-researched response,
many Federal style buildings have been
landmarked despite significant alterations.
She points out that when the much altered 511 and 513
Grand Street were designated, Mr. Tierney stated that
“These Federal-style treasures recall an important period
of New York city ’s development,” an argument that
Mendelsohn rightly suggests may appropriately be
applied to 35 Cooper Square .

Needless to say, under the circumstances a press conference and
and rally are the logical, democratic response in defense of
such an important historical resource.


Photographs of 35 Cooper Square and information about
our other efforts to preserve, protect, and celebrate the
Bowery and Cooper Square are available at:
www.boweryalliance.org

From the Bowery Alliance of Neighbors:

35 Cooper Square Press Conference and Rally
Friday, 1/28
4:30 p.m.
35 Cooper Square
There will be a rally and press conference in front of 35 Cooper Square to save this wonderful Federal-style house from demolition and to push for landmark designation. It is one of the oldest houses left on the Bowery. In addition to its architectural significance, its important historical and cultural associations range from a direct descendant of Peter Stuyvesant to the building's much later habitation by Diane DiPrima, the most influential woman of the Beat Generation. This much-beloved little building has been both a significant participant and a surviving witness to New York City history for 200 years! Under the stipulations of the Landmarks Law, it qualifies on architectural, historical and cultural criteria for designation as a NYC individual landmark. Losing this house would be a significant loss to the history of the East Village for both cultural and historical reasons. 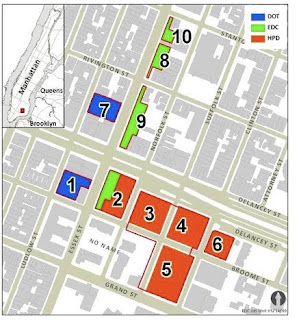 Tuesday Jan. 11 is the deadline for community comment submissions (send to spura@cb3manhattan.org) on SPURA -- the largest vacant land area south of 96th Street -- a rare opportunity for the creation of affordable housing, and a part of Bloomberg's plan to create or preserve 165,000 affordable units, including 60,000 new units to be created. How many of these 60,000 new units SPURA will contribute depends in part on what our community says.

In other words, the CB plan, if built, would result in at least 1,600 residential units, about the size of one EV block of six story tenements.

Whether the city will respect the community agreement is an open question. Look at what happened to Atlantic Yards. SPURA stands in Sheldon Silver's district, and he has not yet commented.

The city, however, seems strongly committed: the city needs the revenue from the sale of the land, the residential and commercial taxes and residential disposable income that development will bring, as well as add to the legacy of the mayor, who has made affordable housing a goal. But before the city can move forward, it needs an agreement from the CB, as a first step. So now is the moment to express support for affordable housing in Manhattan.

View the current CB3 plan so far at CB3's website.
Send your comments to spura@cb3manhattan.org
Posted by rob at 12:38 PM 1 comment: