A dormitory at El Bohio

About a dozen suits from educational institutions met today at P.S. 64 (formerly El Bohio, site of Charas), all prospective tenants. Is Singer moving ahead with a dormitory? What happened to all the community plans for the building?
Posted by rob at 8:21 PM 1 comment: 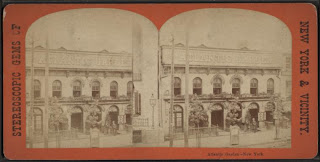 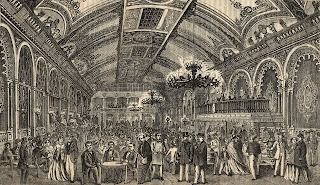 The 27-story hotel will rise on the site of the old Atlantic Garden, a respectable German beer hall built in 1858, part of which appears to remain standing on the Elizabeth Street side (The Bowery Theater was next door where Jing Fong now stands). Like the Bowery Theater, the Atlantic Garden became a Yiddish theater, according to the Times, in 1910. The front facing the Bowery was torn down in 1916. (Photos NYPL)
Posted by rob at 10:17 PM No comments:

27 stories on the Bowery

Curbed and the Real Deal report plans for a 27-story hotel/condo complex on the Bowery just south of Canal Street, next to the old Citizens Bank (now HSBC).

The historic Bowery Theater once stood on this site, the city's largest and most influential theater, where T. Daddy Rice introduced the blackface character Jim Crow in 1832, where Frank Chanfrau created Mose, the Irish gang-hero, where Thomashefsky first performed Hamlet in Yiddish. Now it's a Duane Reade. What will this 27-story hotel do to the Chinatown neighborhood? Look at what the 22-story hotels in the LES did to Orchard and Ludlow.