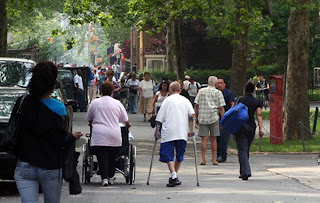 If the board of Masaryk Towers has its way, the section of Rivington Street that runs through the Towers will be closed off and gated, forcing thousands of pedestrians, including seniors, to detour all the way to either Houston or Delancey merely to get from Columbia Street to Pitt.

The board cites crime and rising insurance rates as motivating their decision to gate their community by closing the pedestrian walkway. However, no crime statistics have yet been produced to justify their claim and it's not clear that the walkway traffic is responsible for the insurance raise.

Residents in the surrounding areas are repelled by the prospect of a gated community in their midst, gated to keep them out at the expense of their free access and mobility through their city. Many suspect the Board's motives.

The issue is not merely local. New York, for all its ethnic segregation, enforced or chosen, has so far avoided gated communities. The idea affronts the model of urban coexistence, the interactive diversity that has characterized this town since its first days as an international port. And the streets have always been a public amenity -- public spaces within government jurisdiction, essential and foundational to the public weal.

New York City government laid out the streets with the 1811 grid, designed so that development would not hinder general commerce, traffic, mobility and access. If a private board can close a public street, the government has forfeited its role in protecting the public good, which is the sole justification for government.

The surrounding community has suggested that the Towers gate each individual building, leaving the walkway free. But that will not likely assuage the concerns of the Board.

My two cents: maybe the best solution would be to have the city put Rivington Street back on the map and return it to full use as a city street -- vehicles and sidewalks, just like any other street anywhere else in Manhattan. It would be a shame to see the walkway disappear as a traffic-free space, but a standard street is be better than a divided community. And who knows, maybe the threat of losing the walkway entirely would bring the Board back to its senses and to a urban spirit of unity.
Posted by rob at 8:50 AM 8 comments:

Demonstration, March and Rally in Harlem

Demonstration, March and Rally in Harlem
Against Displacement & Gentrification


details and press advisory below

We are the heart of Harlem

Demonstration/Rally in Harlem Against Displacement & Gentrification


10 AM Feeder March in East Harlem
Gather at 116th & 3rd Avenue: northbound on Third Avenue to 125th Street. Proceed westbound on 125th to Madison Avenue southbound to 124th into Marcus Garvey Park at approximately 11 AM


2 PM: Rally begins in Morningside Park with speakers and performances.


Background: After decades of public policy neglect, redlining and disinvestment Harlem now stand at the brink of losing its historic status as Black America's cultural Mecca for more than a century. Although development is a welcome relief from abandoned buildings, neglected open spaces, few service amenities and crime the "revitalization" of Harlem is displacing tenants, driving out local businesses and will impact Harlem's ethnic, political and socio-economic makeup. Projected developments will create nearly 5,000 units of mostly luxury housing within Harlem's 125th Street commercial corridor from river to river. The scheme includes high rise office tower, hotels and space for giant retails, in some cases with millions in public subsidies such as Columbia University, the city's second largest landlord, that was given city streets, sidewalks and the below surface land.