Posted for the benefit of the City Parks and Recreation Department. View it after the jump.

A new calisthenics park for the East River Park?

Also for the benefit of the City Department of Parks and Recreation.

Here's the complete series on Gentrification in Chinatown:

Prestige and its deceptions and betrayals

and a broad consideration of the government role in gentrification and the flaw in academic theory.

History of the tenement: complete series

Here is the complete list of posts, in order, in the series on The History of the Tenement in New York (I've included the popular A history of the slums of New York post that complements the tenement history):

Preface: A history of the slums of New York

Introduction
Why are tenements so diverse?

(an outlier hypothesis)
A digression

Banks, Romans, fashion-mongerers and modernism
What Roman architecture tells us about our notion of time and fashion, progress, and our cultural personality

The inverse law of ghetto real estate
The economics of exploitation

A market lesson in brick
The oldest and tallest tenement, and how it got that way

Don't believe what you read
...or see on a cornice or on a NYC gov't document

Don't trust historians
How the limits of professionalism can mislead

And ignore the know-it-alls
Know their bias and agenda

Personality, humor and taste
in tenement design of the 1880's and 90's

Exhibitionism
The last hurrah of wealth and privilege

The law of unintended consequences
What conduces to freedom, expression and innovation?
Posted by rob at 11:17 AM No comments:

The law of unintended consequences

Garbage transformed New York forever. It preserved the old and turned the new into the spectacular and grandiose. How? Here's the story.

Social reformers in the 19th century replaced the eugenics explanation for poverty -- that the poor were poor because they were genetically defective, incapable of civilization by their very nature -- with a socio-economic explanation: substandard living quarters. The tenement's core defect was the airshaft, the space between two tenements in the interior of the lot. Its purpose was to bring natural light and fresh air into interior rooms, but it turned into a permanent mulch for garbage instead. Dug to the foundation, and without easy access or egress, garbage once thrown into it, stayed there. It was unsanitary. When it burned, the airshaft acted as a flue to spread the fire. The airshaft caused many deaths during its twenty-two year reign.

Reform came with the New Law and its requirement that every multiple dwelling have a large courtyard for garbage storage-and-removal. The courtyard prevented redevelopment on single lots -- if you had a four story building covering 80% of the lot, redeveloping it to six stories but with a large courtyard would lose rental space not gain it. As a result, only landlords or developers owning multiple adjacent lots could redevelop a building. Owners of single lots were out of luck. They had to sit with their property as is forever. Historical preservation was not the intention of the New Law, but that was its consequence.

The exception was the corner lot, of which the law allowed nearly 100% lot coverage. So you'll see four and five story tenements all in a row in the East Village on 2nd Avenue, for example, between spectacular New Law tenements on the corners like bookends.

The New Law tenements, despite being constructed along distinguished, elegant principles of the Academie des Beaux Arts, and are impressively grand, harmonious, and dignified, are actually repetitive, largely unimaginative and full of mass-produced ornaments. They look like impressive mansions of the wealthy, but they are not particularly interesting. Once you've seen a few different styles, you've seen them all. Ironically, people view them as special because they are expensive looking, while the Old Law tenements, original, wild, unique, distinctive, are viewed as cheap, mass-produced and without design. 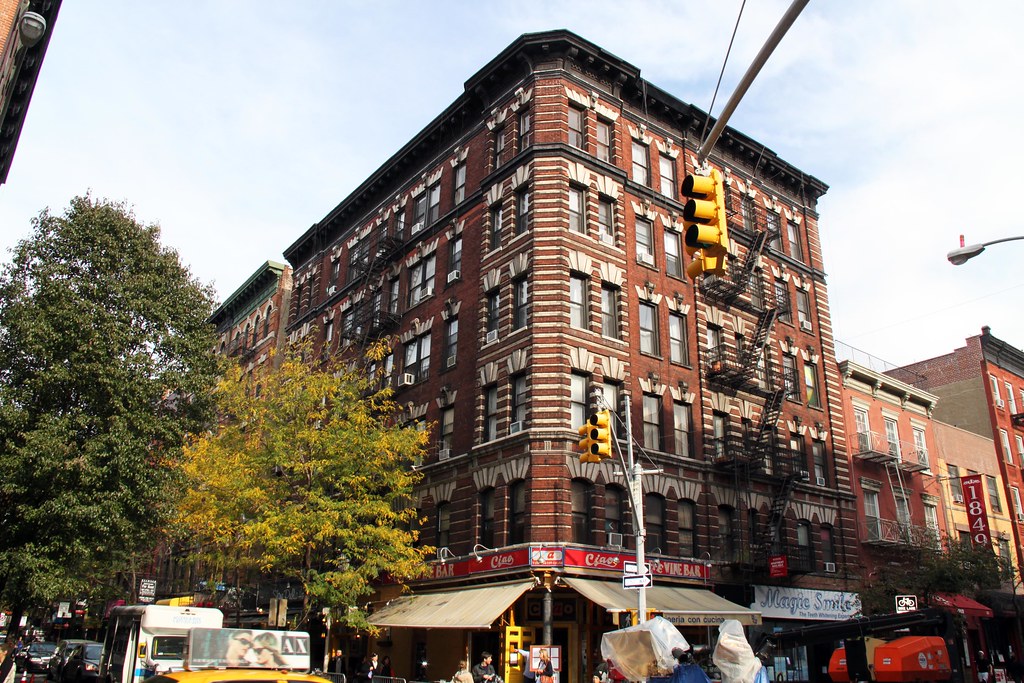 The invention is limited by the narrow range of ornaments available and the structural elements in which they can be arranged. Occasionally you'll see unusual and subtly distinct solutions to structural design, but more often you find easy iterations of the familiar. This little mini-frieze ornament can be found all across the city without any alteration:
not to mention all those corner stones, pediments, broken pediments, scrolling pediments, every one of them imitations of models two thousand years old. They are beautiful...and stifling. The age of wild invention, of personal design was ended by academic principles of superior right and correct standards.

Garbage and the law of unintended consequences.
Posted by rob at 11:19 AM 7 comments: