A march to save Chinatown

I'll be joining a march to protect Chinatown from gentrification and displacement Friday, September 25, 4pm, starting at 227 Cherry Street and marching to City Hall.

If you want to join: 227 Cherry St. is near the FDR Drive on the north side of the Manhattan Bridge; nearest subway station is the F train at East Broadway & Rutgers St. See the map below.

The Department of City Planning has dismissed the community proposal without any research whatsoever, by its own admission (I asked them point blank at a meeting with them). Instead, DCP has clearly indicated to us that it wishes to develop within Chinatown and around it.

March in solidarity with fellow New Yorkers
to protect and defend Chinatown
from gentrification and community displacement:
Friday, September 25, 4pm
227 Cherry Street to City Hall
(227 Cherry St. is near the FDR Drive on the north side of the Manhattan Bridge; nearest subway: F train ​​to East Broadway & Rutgers; see the map below) 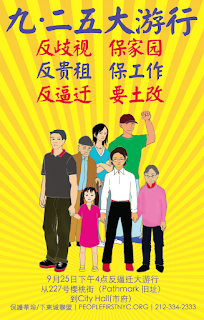