And don't believe the know-it-alls

We began this series on tenements with the question, "why are some tenements so ornate?" Why would the tenement owner bother with all that terra cotta? Along with the irrational answers to that question, there's an additional response: terra cotta is a molded ornament, so it lends itself to mass production.

You can see what's going on with this repsonse. One, there's an expression of inside historical, artistic knowledge about terra cotta and how its made. But also there's an attempt to explain away the ornament question by disparaging the tenement-as-art, describing it as cheap, common and unoriginal. Why did the owner bother with ornament? -- because it was no bother. I've even heard these know-it-alls discredit the tenement as not even designed -- the landlord went to the warehouse, ordered a dozen of these, half a dozen of those, and had the construction crew install them over all the windows.

As you probably expect by now, I'm going to bury these self-servers of little knowledge. While it is true that terra cotta can be mass produced, and certainly was for the spectacular, lush and expansive New Law tenements (which no one complains of as mass produced, so easily are we impressed), the Old Law single-lot tenement almost always has at least some distinctive terra cotta piece unique to itself. Sometimes it is all covered with unique pieces. And sometimes still, it is structurally displayed with undeniably complex design. Ecce, demonstrare: 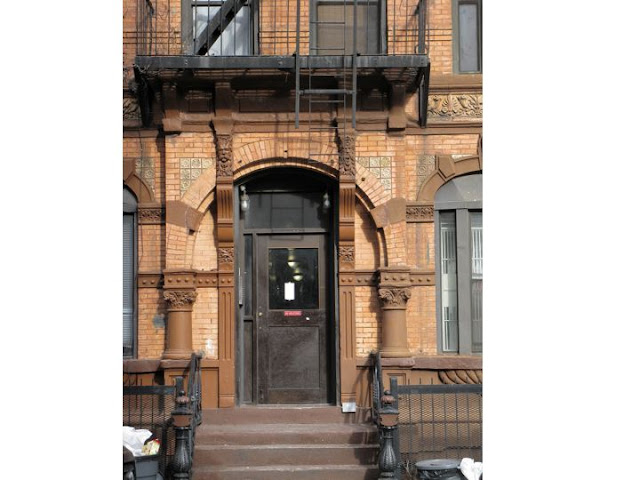 What you see here is a truly bizarre design. The squat columns do not need to be squat. They could have been traditional columns and the arch could have started higher up. It would have been cheaper to have no arch at all, and no interrupting band along its way up, except that would have exposed the cut bricks. The careful thought in this design is everywhere apparent. But that's just the start.

The masks atop the two pilasters are different -- one sports only a mustache, the other a beard. On each floor, there are two masks. No two of them are alike. 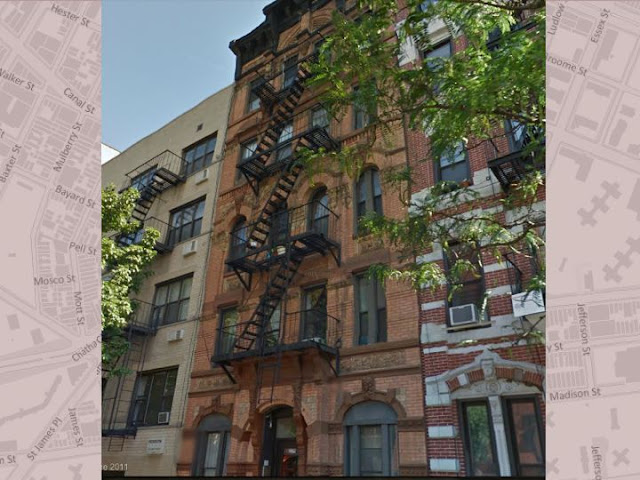 The windows alternate between segmental arches and flat ones, and the ground floor has broader segmental arches over bay windows. Way up high, there are terra cotta caryatids -- full body figures, both unlike, one female, one male.

The entire structure forms a columnial rise to an arch at the top, with a rectangular cornice. As you look at the all the elements together you can see that the design plays out as a counterpoint between the rectangular and the arched. You can see it in the entry (vertical pilasters and horizontal bands cutting across the segmental arch) as well as in the choice of rectangular cornice over the arched top floor. Three colors of terra cotta, tinted brick, diverse bands and plaques of terra cotta -- "mass produced" doesn't explain any of this diversity. The caryatids are unique to this building, as are most of the masks. And the squat columns are the proof of design. This tenement was built around the same time as Henry Hardenbergh's prestigious, elegant and fashionable Schermerhorn Building on Lafayette Street, about eight blocks away. The Schermerhorn is also multi-colored, covered with terra cotta. Most distinctive are its columns. They are squat. 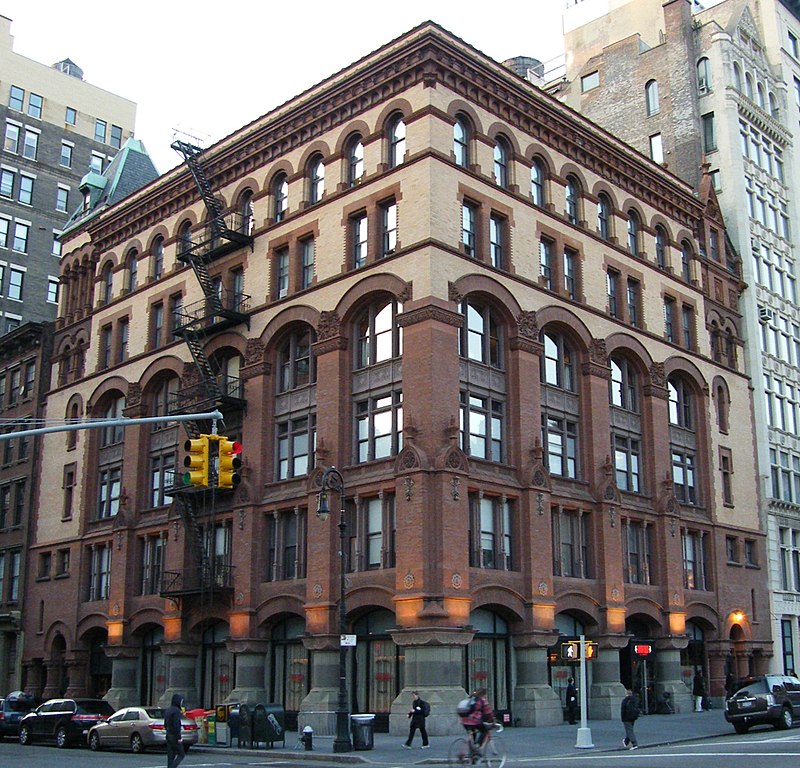 The masks are wildly mustachioed, just like our tenement example, and the female face are like too. 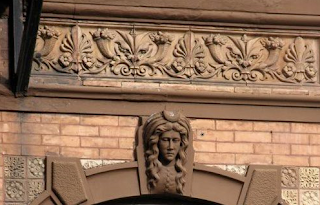 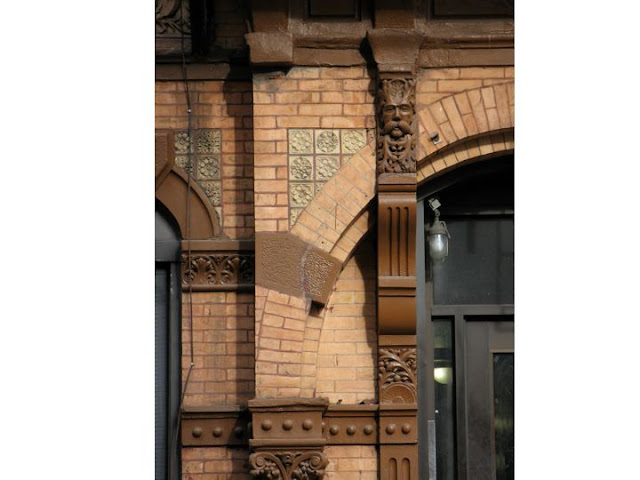 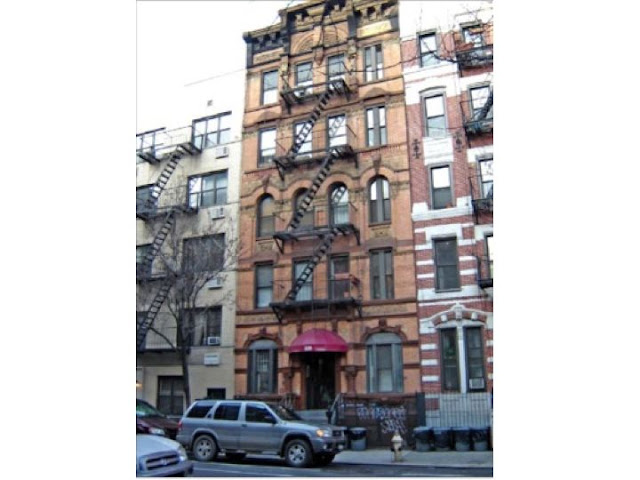 The tenement is of course far more modest. It's constrained by a 25' frontage and no corner to wrap around. But the designer has set out to reconcile those limitations with harmony of forms -- the arch as a unifying, harmonizing principle balanced with the rectangular shape of the building. What he came up with has the feeling of an experiment with all the elements drawn from the most fashionable design of the day. All built for immigrant labor. 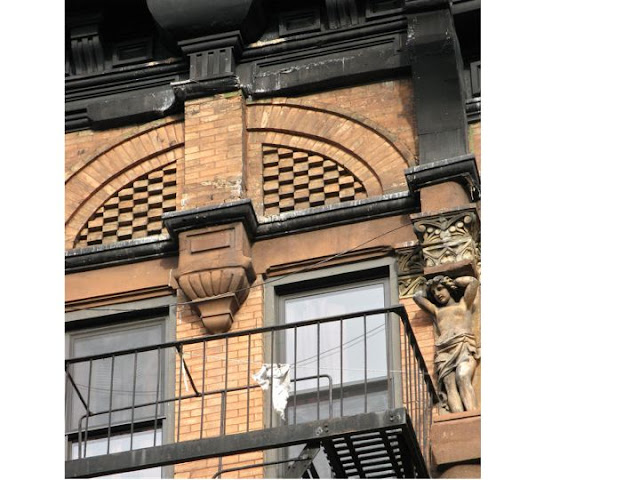 Or take a look at a Herter Brothers building: 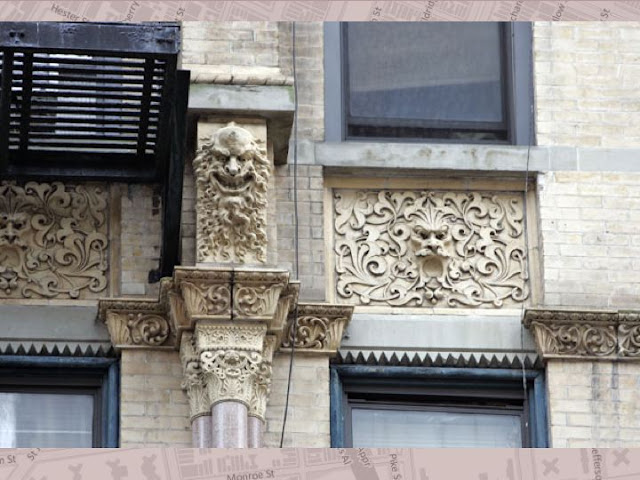 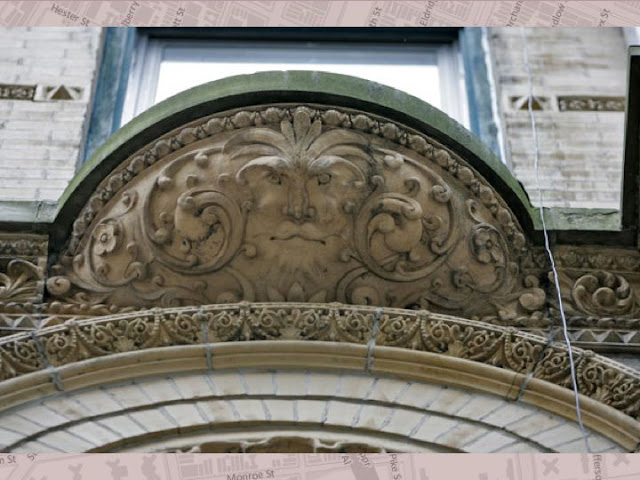 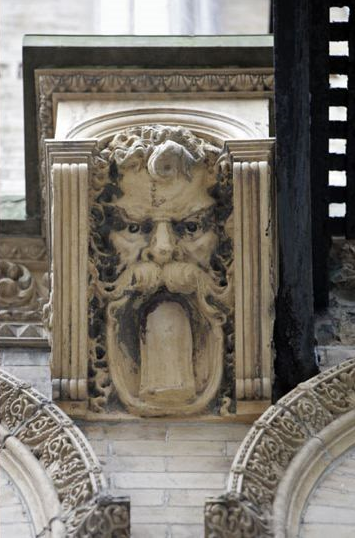 These are all unique masks and panels, not found on any other buildings. But just as the designers added something distinctive to (just about) every building, the Herter Brothers also added elements that identified the building as one of theirs. Those will be the ones repeated in more than one building. These designs were the architects' signatures. When you walk through the Lower East Side, you are looking at the portfolios of Gilded Age architects.

Prior to the 1880's and the appearance of terra cotta, designs were all alike. After 1901 and the emergence of the City Beautiful Movement, design was ruled by Parisian models and architects who studied in Paris. It's only between around 1880 and 1900 that we see this efflorescence of originality in the streets, this display of personality and diversity and originality.
Posted by rob at 11:41 AM