Stanford White: a rich man's architect for whom interior design was as important or more important than the facade or the structure. After all, the rich enjoy the interior; the exteriors belong to the plebeians.

White was one of the many exponents of the City Beautiful Movement, a moment in US Gilded Age history when the matured nation recognized itself as international. It began with the Chicago Exposition in 1893 which brought European trends for Americans to immitate. New York now had in Chicago an American competitor, and compete it did. The models would all be drawn from the principles of the Parisian Academie des Beaux Arts, which meant Greco-Roman temples and derivatives. For tenements it meant uniformity of ornaments, abandonment of masks in favor of a select few frieze designs and abstract elements of architraves. The Gilded Age movement expressed itself fully, though, in the bank building. It's no surprise that White's masterpiece was the Bowery Bank. But the structure is full of surprises.

Start with the exterior. Lying on the Bowery, a street that curves concavely to the west, the lot on which the Bowery Bank is slanted, slightly rhomboid -- the sides are not perpendicular to the street. To compensate for the angle, and still have a grand three-dimensional entry with depth that would give the impression of a single point perspective in a rectangular space, White foreshortened the north side of the arch so that the coffers of the arch on the northmost are a bit smaller than the ones just next to them, and those are smaller than the ones next to them to the north side until the southmost coffers are about twice the size of the northmost ones. The difference is so gradual that you will not notice it at all unless you look up and carefully attend. It is so unnoticeable that I can't find a single photo online of just the coffers showing the gradual change in relative size. This photo gives a sense of it once you know -- otherwise it just looks like the photo was taken from a spot to the right. 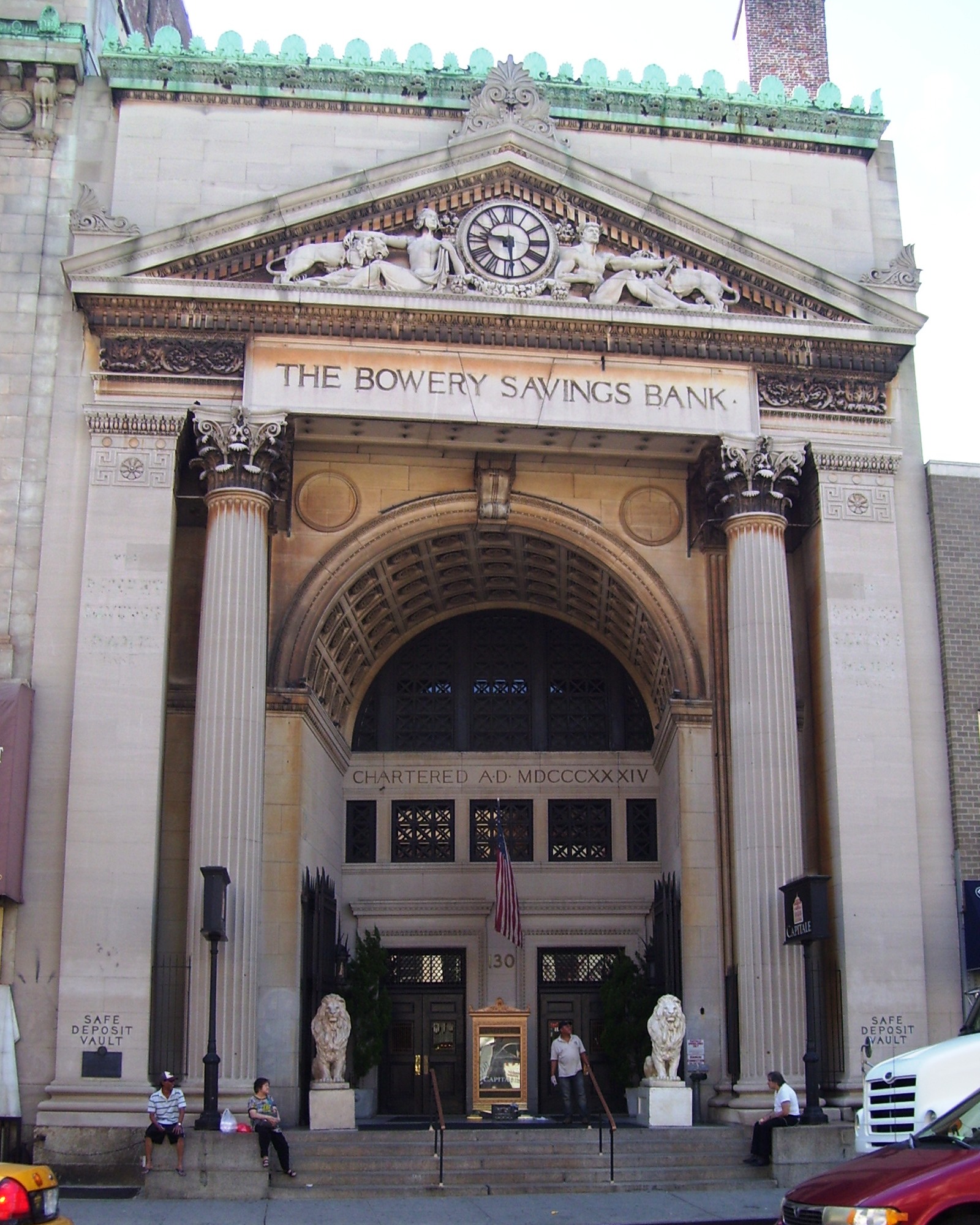 White could have designed a rectangular entry, compromising the regularity of the interior space. Instead he preserved the interior, contorting the exterior. It pays to go there and see it yourself, since the play on perspective is even more effective when seen through two eyes.

The interior seems exactly as extravagant as you'd expect: huge columns made of multicolored veined marble, holding up a huge coffered dome, also marble but unblemished white. It's a spectacular space, impressive wherever you look.

You'd never guess that there is no dome. The coffered ceiling is held up not by the columns, but by an unseen metal frame above it. The columns could not possibly sustain a dome -- they're hollow plaster with rolls of burlap inside. Both the columns and the ceiling are not marble but cheap plaster, the columns cleverly painted. All of it is fake, a fraud. But you'd never know.

What had begun as a movement to enhance the grandeur of the city, ended as an empty showcase for wealth -- ornament for the sake of show not for structure, mere appearances, the display of wealth for the sake of impressing, junk jewelry and lots of it, unrepentant exhibitionism.

The Gilded Age was succeeded by social reform emerging out of revolutionary sentiments socialist, communist and anarchist. It was a reaction to this excess of pompous, self-congratulatory wealth. The Beaux Arts structure was replaced by the inspiring utopianism of Art Deco, closely associated with the cult of the social-political hero -- Mussolini, Hitler, Lenin and FDR. Only later did the sound socialist principles of the Bauhaus return architecture to sanity, morality and service to the working class.
Posted by rob at 11:31 AM