Semiotic neighborhoods vs the authentic and antifragile: prestige and its deceptions and betrayals 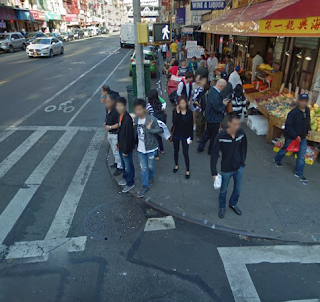 (These remarks elaborate an informal presentation I gave as guest speaker at a Columbia University Urban Planning Master's Program class last year. I was asked to discuss Chinatown and the East Village as semiotic neighborhoods. The basic idea is that in ethnic enclaves, the commerce that serves local residents is more resilient than touristy commerce.

Representations designed to broadcast identity for outsiders betray the people and culture that it purports to represent, so there's a correlation between broadcasting outside and economic fragility, as well as deception and betrayal. Authentic commerce, by contrast, doesn't represent and is antifragile -- it grows stronger in a crisis because the locals have more needs in a crisis, and the local commerce serve them.

Nevertheless, prestige and respectability are measured in mainstream cultural standards, far from ethnicity and authenticity, and are by nature hypocritical -- invested in presenting and maintaining themselves as prestigious, respectable and mainstream, regardless of the real ethical and moral defects of the apparently respectable -- so authority, including many city planners, administrators, financiers, developers and local community opportunists, scorns and ignores the authentic stability of the enclave's economy, endangering the future of the enclave. Although an ethnic enclave can thrive and grow despite outside catastrophes like terrorist attacks, hurricanes and recessions, it is vulnerable and threatened by internal and external authorities seeking to gentrify it. Already gentrified neighborhoods seek representations of authenticity that betray the authentic roots of the neighborhood. They are stabilized by luxury commerce dependent on upscale trends.)

What is a semiotic neighborhood? Simply put, a neighborhood full of signs. Any commercial street will be lined with signs that draw to its consumers. Delancey Street signs draw to the low-income residents nearby. Times Square draws to an international tourism consumer, advertising the entire city -- that's why the signs are so large, so bright, on-the-pulse and sexy. The signs can be read as an indicator of the character of the consumer.

But semiotics of a neighborhood is not just commercial signage. There are no commercial signs on Park Avenue north of 59th Street, but the stone and stately architecture, the spareness and cleanliness of the streetscape, the absence of commerce, all send a message that this is both a residential neighborhood and a wealthy, exclusive one.

Semiotic neighborhoods can be divided among those that broadcast their signs outside the neighborhood, and those that look inward. Broadcasting neighborhoods use their signs to create an identity for outsiders, an identity they can easily read. It can be a bit of a contradiction: an ethnic neighborhood can broadcast an identity that belongs to the outsiders -- self-stereotyping -- instead of being authentically ethnic. The purpose of the identity after all is not to be authentic, but to draw customers. So notice that it's money that leads to the fakery and the fakery is a betrayal of its own.

In the literature of semiotic neighborhoods, inwardly looking neighborhoods are not even considered as semiotic -- they don't try to speak to the general public or communicate using the broader language of the culture, the recognized stereotypes; the motivation of their signs are restricted to the needs of locals, with no thought of trying to impress anyone with an enhanced identity. Ironically, they have authentic identity -- because they're not trying.

Local-serving commerce has low costs, since the customers don't have to be enticed and brought to the door. The locals are a bit of a captive market. As long as the prices don't drive the locals to seek a better deal, the local commerce can rely on having its customer. When there's a crisis, even a catastrophe like 9-11 or Hurricane Sandy, the local commerce actually thrives. The local residents have more needs in a crisis, not fewer, and the residents are even more captive without transport. They must find their needs served locally.

In a crisis, a semiotic neighborhood can be devastated.This happened in parts of Chinatown after 9-11. Mott Street, which had been outward-looking with antique stores and Chinese souvenir shops, lost many stores, and has only recently recovered.

East Broadway, the center of the recent immigration and lined with local-serving stores, has not been devastated in the wake of 9-11 or even the Great Recession. It's been crowded and bustling, the commerce vital and thriving.

To be continued...
See also in this series:
Prestige and distortion in Chinatown
Suits and betrayal in Chinatown
The Mobility Dilemma and the Clearinghouse Effect
Authenticity in the East Village
Posted by rob at 3:47 PM