I'm cheating here. I posted this about a year ago, but it fits into the series exactly right here, and I'm short of time anyway. It starts the story of how landowners --the original New York City gentry -- encountered a vast landless immigrant labor force drawn to an industrializing city...


Concerning the history of real estate in the slum

Trying to attribute gentrification to the real estate industry, Neil Smith came up with an analysis that distinguished ground rent from building rent. It's an echo of David Ricardo, whose brilliant analysis of rent distinguished the value of the land from the value it produced in an agricultural economy. Smith's distinction is inventive and imaginative, but maybe not reflective of any economic reality. I think he conflated potential with real. To explain why I think so, I'm going back in time to the roots of slum real estate.

In her Manhattan for Rent (Cornell 1989), Elizabeth Blackmar recounts how Henry Rutgers, in the 18th century, leased out a piece of his land to a contractor, specifying exactly the size of the house the contractor could build. Too small a house might attract poorer tenants, too large might attract boarders, in either case altering the character of the neighborhood for the worse, degrading the value of his land.

In old New York, the gentry leased land to a contractor who would build a structure and rent it out to a single-family tenant. The building owner then extracted the rent on the residential tenant and in turn paid rent on the land to the landowner. Rutgers' specifications recognize that the value of land depends not just on the rent of whatever structure is built on it, but on the value of the land itself. For Ricardo, the value of the land depended on the demand for the best soil for cultivation. In a city, and for Rutgers, it's the demand for the best neighborhood, the cultivation of preferred neighbors.

The drawing at the top shows the Five Points neighborhood, lower Manhattan's notorious slum of the mid-19th century. The artist gives the impression of the topsy-turvy discord of the place, a kind of bizarro-New York. Wooden houses are sinking into the ground at different rates, street fights abound, a white gentleman is kicking a woman, presumably a prostitute, into the street while the only dignified character is the black gentleman in a top hat. Prominent among the incongruities is a tenement building, standing like a Trump Tower amidst a tattered Detroit street.

Here's a photo of the same street taken probably a few years later. You can see that the shack next to the tenement has sunk even deeper. In the drawing it's a two story structure, but the photo shows the ground floor window below the street level. 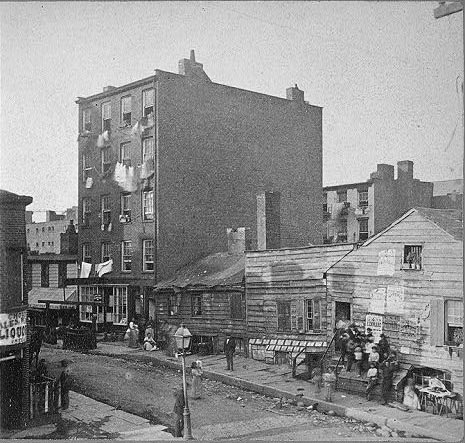 Charles Dickens had visited this very corner only seven years prior. He complains about the knee-high garbage in the gutter, and that's actually how this photo can be dated. The streets of Five Points were so filthy the city decided to "scrape" them clean in 1855. The story goes an Irish immigrant commented on seeing the newly washed streets of her neighborhood, "I had no idea there was cobblestones down there."

The cleaning of the foulest quarter of New York must have been quite the news. Five Points was not just the city's troubling social problem -- no one had ever seen such poverty, density or desperation in the city before, not to mention the concentration of Catholicism -- the place had also become a curiosity, a circus-like attraction. This photo was the instagram of its day -- The streets of Five Points have been cleaned?!? Definitely got to check that out and record it! -- and here it is, Five Points recorded ironically at its only clean moment, no doubt misleading many viewers today to think "It wasn't as bad as the literary accounts of it." Among the misled may be the viewers of Scorcese's Gangs of New York which reproduces dusty but barren streets, very much like the one in the photo. Here's what the streets of Five Points normally looked like: 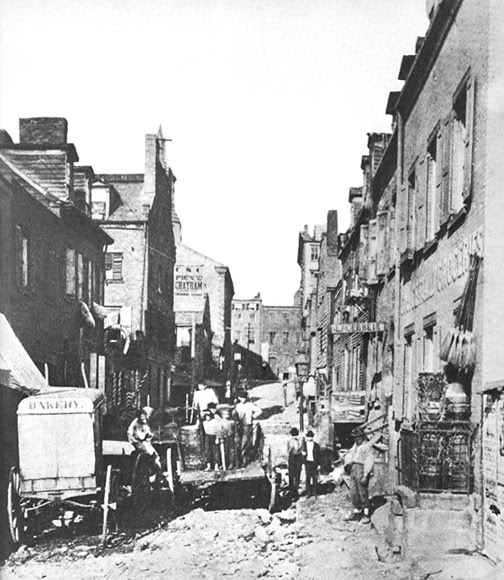 Easier to see with this photo of a nearby East Side street lined with ca.1865 tenements, taken prior to 1894 when Colonel Waring finally got the streets of New York clean:

Not pretty. Dickens' complaint was no literary exaggeration. (Btw, if you look at photos of NYC streets in the late 1890's, you'll typically see cute little piles of horse shit here and there. They don't indicate that the streets weren't clean effectively. They're actually the mark of Waring's success. Priorly, you couldn't tell the horse shit from the heaps of excrement of all types, as above.)

Now take a close look at the tenement in the Five Points photo and drawing, in particular, what's behind the tenement in its lot. There's a back tenement -- a smaller tenement behind the main building. That little building tells all. I'll say a lot more about the reason for and the structure of the back tenement, but for now, let's just consider the mere fact that it's there.

In his contract, Rutgers also specified that there be no back house in his lot. A back house was guaranteed to bring a bad element. Who would rent in a back lot? Who would live in a front building with no back yard?

The mere existence of that back house says unambiguoulsy that the landowner has lost faith in the neighborhood as a place where he would ever consider living in. He's abandoned its use to the exchange value of its building. That shift will send both the land and its building floating onto the current of exchange, of industrialization and immigration, and eventually to legislative reform.

And that's why it's so tall. At a time when the tallest townhouse was was three and a half stories, these tenements were the skyscrapers of its day. People of means spurned apartment buildings. Multiple dwellings -- they called them tenements, but they were just apartment buildings -- were for immigrant Catholics, not for dignified society. The decent lived in a house.

And it wasn't the tallest. But I will finish this story later. The real estate market, immigration, density, the lack of public transport, and most important, the owners' relationship with his land -- all influence the character of construction and of neighborhood. It's a story of an inverse relation between use value and exchange value that characterizes slum real estate, exactly the opposite of the non slum market where use and exchange and demand all rise together. In the slum, demand and exchange rise at the expense of use. The more demand, the higher the price, the worse the conditions and the greater the density. It explains the uniformity of the slum and its diversity over time. More soon.
Posted by rob at 2:40 PM

While there are many Trott factors that a buyer considers when buying a home, the first impression is key. It affects the way a potential buyer views the house when they enter. If a house has bad curb appeal, they may look closer for flaws and find fault with everything. But a house with great curb appeal can have the opposite effect….

At American Real PM our mission is to provide the most amazing management experience to both client and customer. Our leadership has over a decade in real estate experience and has a passion for both real estate and building long lasting relationships through exceptional service. We have expertise in rental real estate from top to bottom that we use every day to help our clients navigate the complex world of single family home rentals http://americanrealpm.com/

Thank you for the good writeup. It in fact was a amusement account it. Look advanced to far added agreeable from you! By the way, how can we communicate?
Playa del carmen real estate

It was excellent dealing with Ross. I feel like he went out of their strategy for finding the best mortgage deal website for our scenario. He had been expert yet really easy-going and always simple to reach once we required anything. He'll also be sure to actively follow-up and find a person once your advices or any kind of details are necessary to facilitate your own situation, overall extremely pleased using the sleek deal