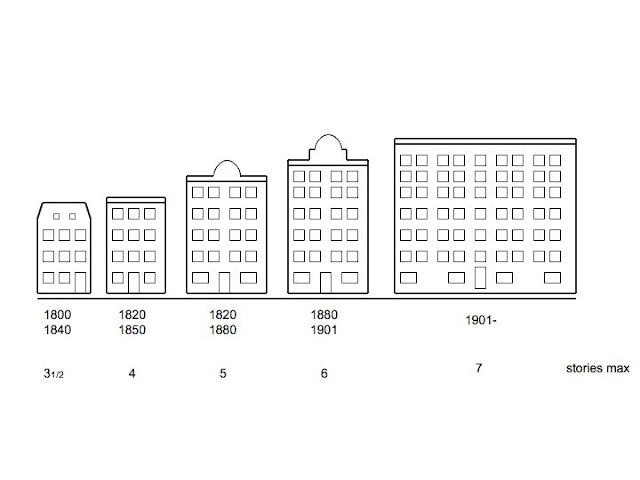 Prior to mass transit trains across the five boroughs, the labor force were compelled to dwell near their source of work, back then mostly concentrated around the docks of the Lower East Side of Manhattan. Growth could not then spread horizontally like suburbia or a Los Angeles. It could grow only vertically to preserve proximity. As a result, the increasing population of the labor force is directly reflected in the bulk and height of the successive structures that housed them.

At first town houses were refitted for multiple families, often expanding the fourth floor servants' quarters attic into a full floor for two apartments. As space became dearer, the houses were built higher with an additional backhouse behind the one facing the street. Why build backhouses rather than building even higher or building deeper into the lot? Either of those options would have saved the space of a second stairwell and a second backyard space.

The design of a town house allows natural light into the front room and the back room, each about twenty feet deep. If the building is built deeper to accommodate more rooms for more families, the interior room would have no light at all. Who would rent such a space, when there are other town house rooms elsewhere with natural light? A dark interior room would have no market, so the only benefit to a deeper structure would be deeper rooms, which would give more space to a renting family, but not more families to rent.

When the labor population increased demand for local residences, the civility of natural light could be disregarded. It became marketable to build one structure deep into the lot, with only one stairwell and only one small backyard and with dark interior rooms for poorer families or borders.
It was only after 1901 that a progressive housing law required adequate natural light and yard space. Until then, the story of housing followed a monopolistic law. If the consumer is captive, the market is not "free" to follow amenities with their money. In a free market, amenities attract higher prices with the result that the market reflects a range of values. In housing, that plays out with a range of modest houses to magnificent mansions. But where the consumer-renter is restricted in place, and the supply is restricted as well, the developer can jack up rents without offering any amenities. The history of the tenement show the opposite of the free market character. When demand was lower in the 1840's, amenities were reasonable -- natural light and spacious rooms. By the 1880's, during a huge increase in labor population, the rooms were smaller, darker and more crowded with more families living together, despite the higher rents. As demand increased, price increased and amenities lowered. The range of housing remained unchanged. In the 1880's and 90's tenements were built at the rate of about two thousand per year, all of them designed on one model. The interior of the tenement was as uniform as the exteriors were wildly diverse.


The ghetto law of a captive market:
S/D=S/P=A (as supply decreases over demand and price, amenities lower).

In the ghetto, as rents go up, amenities like space, light, fresh air and privacy go down -- the opposite of the free market where money chases amenities upward. This desperate exploitation of a captive market -- immigrants not only had to live near the workplace, but as immigrants were not welcomed in "respectable" neighborhoods -- eventually led to successive housing reforms, though not until after the four-day immigrant labor uprising known as the 1863 Draft Riots. Along with a political revolution led by the populist mayor Fernando Wood, Tammany Hall, relying on Catholic labor for its constituency, recognized that housing was the essential problem to be solved for New Yorkers. Plus ça change...

The politics of housing requires its own post.
Posted by rob at 12:58 PM