Prestige and distortion within Chinatown

The Asian American Federation, a social services and research non profit highly regarded within Chinatown, published a study of Chinatown in 2008 in which they found that East Broadway, the center of recent Fujianese immigration and a low-income area, was one of the most resilient, vibrant and successful parts of Chinatown, while much of the rest of the neighborhood was ailing commercially. Yet the study's recommendations completely disregard its findings of fact. Their recommendations all favor tourism with no recommendations that support the ethnic community. 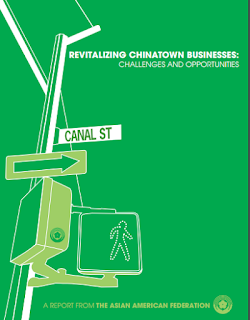 Most telling are the recommendation that waiters learn more English (useless for local-serving restaurants), and the absence of any recommendation that managers stop stealing waiters' tips, a wide-spread practice among restaurant owners in Chinatown. Stealing tips removes the most easily available incentive reward for waiters to improve services like learning English. Without tips for improved service, AAF's recommendation burdens the waiter entirely. The bias in favor of management is evident: compel the waiter to learn English but still take his tips. There isn't even a recommendation for free or supported English lessons.

The power of prestige and respectability is pervasive. Growth is viewed as outward-looking towards an upscale mainstream culture, not expanding and supporting the base. So, for example, here are their findings of fact:


A general lack of customer service reduces the appeal of shopping and dining in Chinatown. Limited English capabilities of staff make it challenging for people who do not speak Chinese to patronize Chinatown businesses. Gruff service from a few businesses hurts the image of all Chinatown establishments. Many stores and restaurants operate on a cash basis, which discourages those customers

The customers mentioned are tourists with credit cards, not local recent immigrants. And "image" is a problem looking to outsiders, not to locals. The sole source for this claim of gruff service and bad image comes from the Zagat Guide -- a restaurant guide published in English for English-speaking customers. There is no Mandarin, Fujianese or  Cantonese Zagat for New York. If you look through all their recommendations, you'll see that they are equally outward, not inward, looking. And this is characteristic of many such studies of Chinatown. Whether they are positioning Chinatown non profits to obtain government funding for development or attracting private sector investment, they ignore the economic base and their recommendations threaten them with unstable, fragile commercial gentrification.

Image and money are tied together. Semiotic neighborhoods pretend with an image for sale, much as a suit allows its wearer to pretend to an image of respectability. The base of the economy is disregarded, dismissed and invisible.

Next: semiotics and deception among the suits in Chinatown, and the struggle up from the bottom.

See also in this series:
Semiotic neighborhoods vs the authentic and anti-fragile: prestige and its deceptions and betrayals
Suits and betrayal in Chinatown
The Mobility Dilemma and the Clearinghouse Effect
Authenticity in the East Village

What about bottle redeemer collectors? I see more and more collecting plastic bottles to redeem for 5 cents. Sad to see that no one notices this invisibility esp. young hipsters as well as no mention in Chinatown newsletters. They are the new social class since closures of garment workers. Where are the more lucrative jobs for them?