Banks prior to modernism all looked remarkably alike and remarkably unlike all other buildings except for government buildings. Why?

A bank building is a form of advertising -- really propaganda -- designed to entice you into giving them your precious money without any commodity to exchange. Instead of giving you anything but a promise, as soon as they get your money, they lend it to someone else whom you do not know and never will know. And they do this entirely on your faith in their respectability and stability. Until the New Deal, their respectability and stability consisted exclusively in that faith -- without that faith, they'd be empty scamming shells. So banks invest in appearances of respect and stability. And what's more stable and respectable than a Greco-Roman temple?
Well, nothing is, but why is the Roman temple so stable-appearing? No doubt it's the empire association, its antiquity and its grandeur. But there's a more important reason that's almost too superficial to notice.

What is the characteristic architectural structure of our culture or our city? Is it the skyscraper? Which skyscraper?

Or the blunt minimalism of the WTC buildings rising without any articulation upwards?

Or the precious postmodernism of the Sony Building?

Or the computer-generated Money-Is-Freedom (or is it the Freedom-Is-For-The-Moneyed) Tower that replaced the old WTC?

Or the haute couture of Gehry's tower downtown?

Truth is, we just don't have a single emblematic architecture. We're too full of fashion. Every ten years, our architecture shifts. That's not recent either. It's been shifting every decade -- sometimes more frequently -- since the 1850's at least.

Now think of Roman architecture. It's all columns, arches, domes, entablatures and grand staircases. The emblem might be the Greco-Roman temple -- classical entablature over columns with a dome behind. Why is it so easy to identify Roman architecture? Because it never changed. 500 years, half a millennium and no change.

The Romans were very different from us. They thought their culture was the greatest in the world. And, Far East Asia except, they were right. Why should they change? The notion of progress was not one they seemed to have understood at all. When Hero of Alexandria invented the steam engine in the first century, did the Romans use it to improve their wretched agriculture or speed chariots over the aquaducts, or employ them in military ventures or for digging or building or anything useful to their economy? None of those. They used the steam engine to make statues move their parts to impress the barbarians. Their lack of agricultural innovation is one reason for their collapse -- it took those ignorant, simple-minded Middle Age peasants to figure out effective crop rotation and harnessed plows. Not so ignorant and simple as it turns out.

Modernism is the opposite of Roman stability. Individualism, Enlightenment skepticism, the independence of the town-dweller, the competitive model of enterprise -- all of these promote the notion that time is change and change in time is progress. It's hard for us to think about the future without assuming it will include progress. The notion of time passing is for us a progress of sorts. Fashion is the essence of that notion bare and pure: the new is better simply because it is not the old. Fashion is little more than progress divorced from improvement.

Where does modernism get its obsession with fashion? It's a familiar story. Under feudalism, when Church, lord and serf were fixed in a rigid system, the townspeople -- craftspersons, merchants and most important, the bankers -- were independent of the structure. With the rise of these independents and their competitive commerce, they instigated the new ideology of protest, revolution and enlightenment unsettling the old and replacing with the ever new. The sciences thrived by rejecting accepted wisdom, and soon lent the industrial revolution its steam. Drafting the serfs from the land to the factory entailed a new ideology of freedom, individual rights and self-ownership. The serf must liberate himself from the lord and possess his own labor which he could sell then for a price in town. Each for his own, and everyone serving capital ownership under the model of democracy -- balancing the state through the aggregate of individual self-interests. It's as far from Roman civic duty as could be imagined. And it's no surprise that suicide shifted from the Roman expression of honor and dignity to the modern expression of anomie, depression, alienation and unbearable lonely sadness.

So it's not just the associations of empire, antiquity and grandeur, but its own stability and resistance to any fashion, which allows it to be the single emblem of an empire extended in time.

Aside from the bank, also the gov't building uses this signifier of stability but exaggerated several times. The gov't building, by its sheer size, intends to intimidate. It says, "don't even think about trying, you're a nothing in comparison with the magnificence of the state."

If the function of the building is reflected in its form, what is the form that suits the residence, the tenement? It's something akin to living-room decor -- the latest artwork ornamenting the walls, something appealing but not scary or stern; a delight, charming, ingratiating and colorful. And that's exactly what you see especially in the 1890's when terra cotta let the designers loose to pour out their imaginations unfettered by stultifying principles of classicism. It didn't last long, but it changed the character of New York. 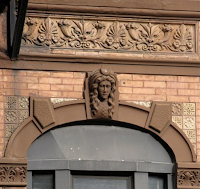 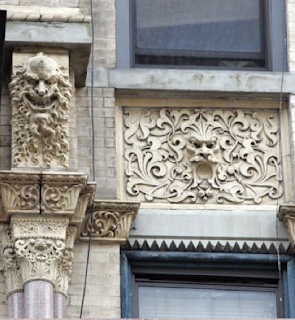 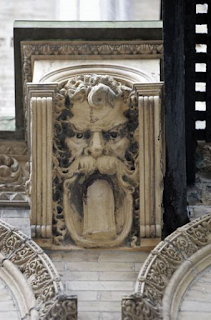 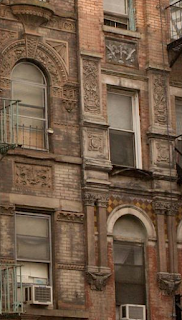 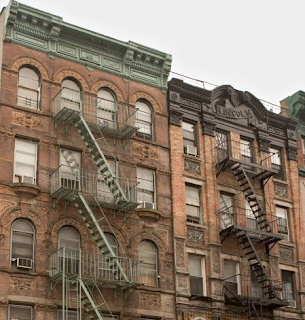 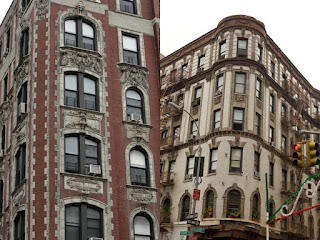 Next up: the origins of the slum in the abandonment of real estate value.
Posted by rob at 3:53 PM