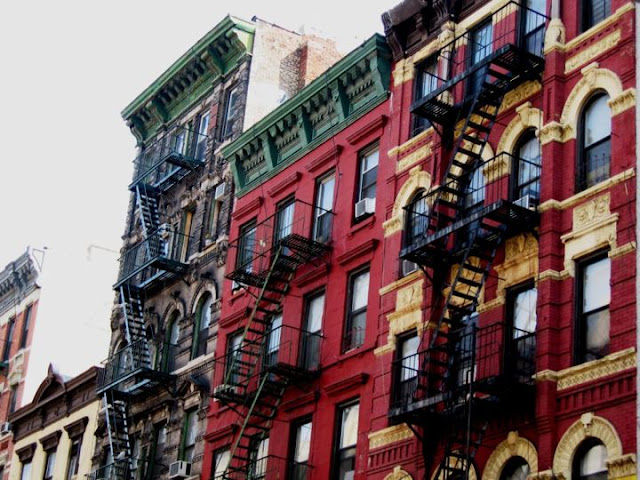 Before I get to the inverse law of ghetto real estate and the social history of immigrant exploitation, I'm going to start with the face of the tenements themselves. It's a long story, but it says a lot about our culture in broader terms than just 19th century New York.

A common explanation for the expensive, lavish appearance of some tenements has an appealing simplicity and naturalness: the landlord was seeking to attract a better tenant who might pay a higher rent. On this theory, the expense of ornamentation is an investment in future rents, a gift that keeps on giving. I've known many otherwise intelligent and informed urban observers who've endorsed this explanation.

Just one problem -- and a moment's thought exposes the weakness of this explanation. Take a look at the photo above. If the builder of the tenement on the right covered it with ornament in order to draw better tenants, what was the owner of the plain red one seeking? Worse tenants? Rowdy, dangerous tenants? Deadbeats, low-level criminals?

Obviously not. No landlord chases after the bottom. So why build plain at all?

In looking at the history of tenements, I was surprised to learn that architectural style and appearance does not discriminate between rich and poor. Expensive buildings may be on a grander scale, and may show a greater sophistication of design, but the elements of style in buildings constructed in the ghetto are drawn from the same stylistic elements as those current in the wealthiest neighborhoods. Architecture is a fashion. Even when someone attempts to break out of the mode, as the wealthy periodically did, probably to distinguish their homes from the vulgar, the architects of the common immediately imitated them. There is no escape from fashion in our culture. There is a cycle of change that begins with avant-garde that, through imitation, leads to fad and competition ending in innovation, at which point the cycle repeats.

Architecture was not always such a slavish fashion, and when I get to the distinctions between function in which architecture in our culture does discriminate, we'll look at Roman architecture and what it says about not only fashion, but our sense of time, progress, our relationship to our society and our sense of self. It's all in the architecture. As I say, architecture is the undeceiving record of history -- not just an art, but a record of living, thought and identity.

To answer the topic question: tenements were built at different times under different fashion modes. One might object that maybe the earlier modes were simple and the later, more elaborate modes were chosen to compete for better tenants. That would avoid the absurdity of imagining a landlord seeking the bottom. But if architecture is a fashion, the better-tenant theory is superfluous. And a quick look at the fashions in the 19th century shows that the ghetto was a faithful reflection of the fashions of the day.

Early American architecture avoided all ornament except Greek motifs, partly to resonate with Greek democracy, but more important to the colonials, to keep at arms length from the extravagances of the Catholic Church. The colonies, and the new republic, were deeply Protestant and anti-Catholic. They were more suspicious of Catholics than they were of Jews, Muslims or Africans. Much of the ground-laying migration from Europe to the New World occurred during the Thirty Years War's devastating strife between Catholic and Protestant, and the sense of independence and Protestantism were tied closely to one another. Puritanical architecture prevailed. Wealth was marked by dignity, not opulence.

When the Astors had LaGrange Terrance built, also known as Colonnade Row on Lafayette Street, they were criticised for its extravagance, one critic complaining that the whole point of the development was the columns, and they obstruct the view from the windows, those silly rich folk. 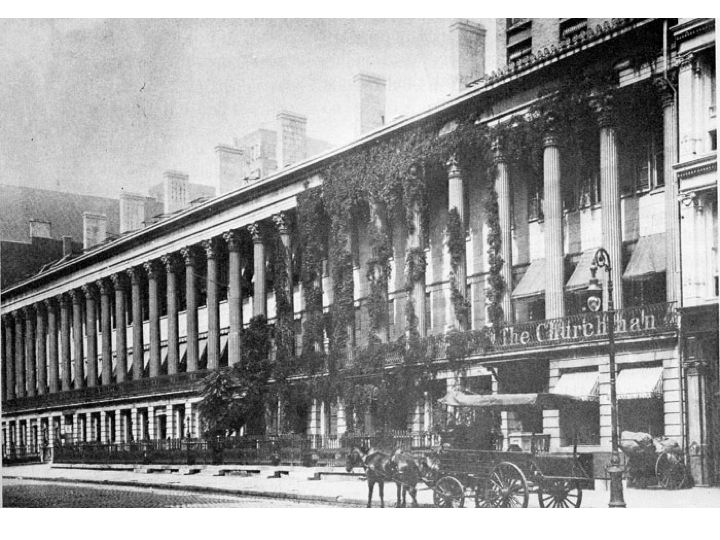 Nevertheless, they started a trend which spread to townhouses, reflected in the Greek motifs in tenements as well. The columns on the Merchant's House townhouse were added after the rest of the building was designed and built in 1832, just as La Grange was being completed. So, as anyone who's been there knows, the bell ringer is almost inaccessible behind the column.

The plain red building in the middle in the top photo shows minimal ornament, and it's all Greek. The lintels (the 'eyebrows' over the windows) are miniature architraves.

By the 1890's New York City was full of Catholics, both Irish and Italian, and architects were following a British fashion for terra cotta with designs stolen from the Italian Late Renaissance and Maniera. It made no difference whether you built a palace for one of the spectacularly wealthy New York entrepreneurs or for the immigrants in the ghetto, you built it in style. In fact, the wealthiest family in the city, the Astors, a third generation of Protestant money, were one of the few real estate developers who refused the ostentatious fashion of 1890's, preferring to build with simple dignity. So you'll find the Astors in the 1890's building plainly, the immigrant landlord building opulently.

Mitchell Grubler, an eminent preservationist in the City, has pointed out to me that architects in the ghetto did create their own vernacular styles distinct from the mainstream. This is certainly true, and we'll see just how they developed their own signatures especially in the 1890's when ornament took precedent over principles, freeing designers to experiment wildly. But the elements of their signature styles are all cobbled together from the fashion currents.

Next: another intriguing theory, also false but also instructive.
Posted by rob at 10:16 AM