Two of the oldest structures in New York were just demolished on Henry Street, 22 and 24: a four story row house and, next to it, a diminutive, narrow town house. Both must have dated at least as back as the 1820's; the town house may have dated back further. I did not have time to inquire about what is replacing it, but there is a girder structure up already.

The screen caps attached, cut from google street maps, don't do justice to them. They were a striking little piece of the early 19th century, unusual because of the pairing of a town house-with-dormers adjacent to a row house with a fully built fourth floor covered by a unique wood awning in lieu of a cornice. I always took visitors to see them on the Chinatown/Five Points tour. After the Mooney House, they were the oldest buildings around, and almost unaltered.

The demolition of a town house in Greenwich Village would spark a protest, an outrage and an angry movement, but far to the east in Chinatown, no preservationists seem to notice or care. And yet, these two small buildings were probably older than anything in the Village, and in a neighborhood with a much longer and complex history. 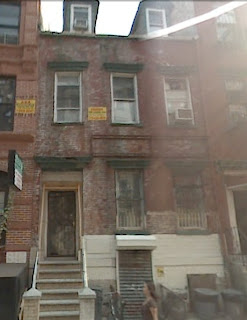 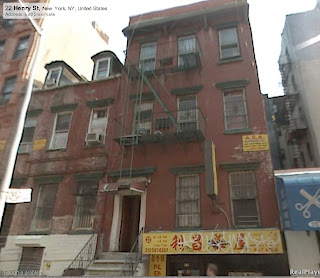 Those buildings should have been sensitively cleaned up, renovated and reused as residences, offices or studios.

But you understand the irony of course. Preservationists don't care because they don't live here. They are as parochial as anyone. And of course, preservationists tend to be upper middle class or more (it tends to be an activity for those who don't have to pull double shifts to make a living.) The problem is, for them to move here, implies more... gentrification! Sort of a catch-22 isn't it. Can't have it both ways.

Completely agree with you about these buildings, but as long as nobody is looking, the Chinatown landlords will do whatever they have to do to maximize profits. They couldn't care less if this thing was built in 1820 or 1620. Only the kinds of people you want to keep out care about "architecture."

You're right on all counts. I understand that my sensibility is problematic. I'm not offering a solution, just an observation that had these buildings been re-used they would have created more value in a real sense.

Aside from being old and the fact that you like how they look, why should these buildings have been preserved? Also, how do you judge value in a "real sense" when it doesn't cost you anything?

Owners of 206 Bowery are trying to do the same thing to a similar Federal Row House at Rivington St. Sad, but how do you stop something like this?

"Aside from being old and the fact that you like how they look, why should these buildings have been preserved?"

--Because there are so few Federal-style Row Houses remaining in Manhattan – they are an endangered species threatened with extinction. They reflect our history and purpose as a community, and a time when Houses existed on this island. Their very existence tell a story about this City that too few know; and stories are how we know who we are and where we came from.

The historical nature of downtown Manhattan draws tourists to and around this City everyday and keep small businesses of all kinds going and people employed. Every time we tear down another one of these irreplaceable structures, we give visitors one less reason to leave midtown – and just how much money does anyone want to spend there.

These buildings stand in stark contrast to the new and glassy skyscrapers, showing the importance of both. If all we had was the new and the glassy, neither would stand out or up for anything.

Saving these historical buildings is important for a healthy mixed neighborhood. It’s good for us personally and as neighbors, it’s good for business, and it’s good for our children and future of this City.

Just let me know if you need more reasons – unlike these buildings, they’re limitless.