Only in New York

A request for evaluation (RFE) had been submitted to the Landmarks Commission for these two historic buildings, 22 and 24 Henry Street in January. On February 4, the owners filed for a construction shed. Now the buildings are gone.

The old town houses were much smaller than the zone allowed, which means that the owner can build a much larger structure now. It is common for a developer to demolish an old structure to avoid a landmarking designation.

This happened on the Bowery only a couple of months ago. The developer, intending to build a large hotel or condo complex, bought three adjacent parcels, on one of which stood a historic structure. Of the three buildings on those parcels, only the historic structure (an early Germania Bank building) has been demolished: 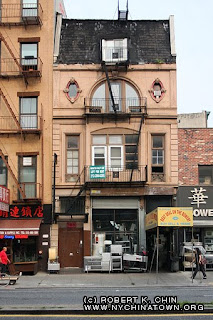 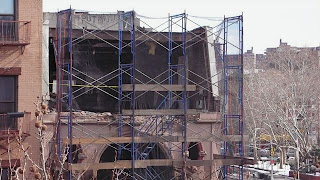 In the world of real estate development, history and aesthetic value must be destroyed, otherwise it stands in the way of "progress" (defined as personal gain). But crap is okay. Crap is great. Crap doesn't threaten money. There's no protection for crap or against it. One piece of crap can easily be transformed into another piece of crap for profit. As long as the city is full of crap, developers can play freely. So it's important for them to build as much crap as possible, and leave as much crap as possible, their own or their predecessors, producing a great, expansive, comprehensive and complete heritage of megalopolictic crap. This is the architectural second law of developodynamics: all value tends towards crap.
Posted by rob at 9:59 AM