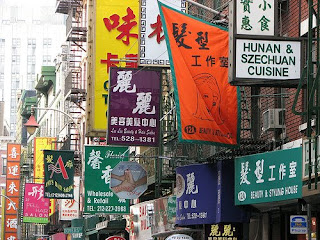 Or Chinatown??
A demonstration yesterday sparked several articles on DCP's omission of endangered neighborhoods from the EV/LES rezoning (the urls are below).

Since 2003 over a dozen huge structures have begun construction or have been completed in the commercial zones surrounding the East Village including 3rd Ave, Essex-to-Bowery and the Bowery itself.

Since 2003 only three out-of scale structures have been proposed for the East Village -- and area over twice as large as those three commercial zones combined.

After the rezoning, which protects the Norfolk-to-Forsyth area, that rate will increase on the Bowery and in Chinatown.

A US recession won't necessarily stop it. The weakening dollar turns New York into a hot, cheap international tourist destination. Commercial zones are for hotels. Developers and patrons will be foreign. Of New York businesses, the chic end of NY's nightlife industry will thrive on the transformation. Local businesses and residents will be edged out.

If the Borough President and Councilmember Gerson don't listen to the community and act now to preserve the Bowery/Chinatown communities, those communities won't be there tomorrow. There's no road back from development.

does this group really think that they will get any sympathy calling the process and those involved "racists?"

seems to me that they should have been speaking up over the last 4 years of the process than in the last few weeks after all the public comment periods are over.

The racist card is, of course, a sensitive one, but so far as I know the only *person* in the process who has been described as racist is Bloomberg.

Despite community board claims to the contrary, the community board did not reach out to Chinatown residents about the rezoning. I FOILed the relevant documents and have read them and the CB administration has admitted it to me in e-mails.

In fact, for the first two years, the task force did no outreach on the rezoning at all. Even the name "197c Task Force" discourages participation. They could have called it "Rezoning Task Force."

I was often the only resident attending the early meetings.

Ah the "protesters" called every single member of the community board racists at the May meeting. Also the leader of the mob Wing Lam even falsely accused chaiman McWharter of threatening to kill him. Wing Lam was using the language barrier to lie to his people and get them to respond to things that were not happening.

I have no sorrow for these protesters they were not involved in the whole process, came in at the last possible moment, and represented themselves in an ugly mob that spewed names.

This is a great blog. Very informative and helpful to concerned residents.

Is there another link on your blog to the documents or e-mail where the CB administration admitted that the community board did not reach out to Chinatown residents about the rezoning? I think a lot of people would be very interested in seeing that.

None of the documents related to the $100,000 spent on outreach to Chinatown are available on line, so far as I know. However, they are available in paper from the CB.

$50,000 of that grant was spent on outreach regarding traffic congestion, 311 use and CB awareness, which did *not*, however, include *any* mention of the rezoning. Most of it was spent on a street fair presentation including a video on traffic congestion. The remaining $50,000 had not been spent as of two months ago, according to the District Manager.

At the time, the community board listed its zoning committee in its agenda and minutes as "197c Task Force." Only the initiated would recognize that as a zoning committee. For the first year the Task Force posted, if I remember correctly, only three minutes out of a dozen or so meetings. The lack of vigorous outreach in the early stages may have been justified by a desire to proceed quickly and effectively, but that strategy has come back to bite them. Participatory democracy is procedurally safer though generally slower and more difficult.

I agree that the race card arouses strong emotions which is why I have personally never used it against people. (I have used it and do use it for policies and their consequences.)

But being called a racist is not nearly as tough as losing your home or losing an entire neighborhood to gentrification and luxury hotel development. Let's get our priorities straight.

In this process I've been called a racist too. I didn't like it, but it doesn't change my view that Wing Lam is absolutely right to protect his community by mobilizing its residents using the most effective means. Not my means, but I'm not a member of his community, so it isn't for me to judge.

Why are we hung up on name-calling? Is it an excuse to dismiss the Coalition's demands? I don't know everyone's motive here, but I am not such a fool as not to see that for some people, complaining about the race card is just a convenient way to avoid the real problem that the community board finds itself in. Blame the victim is an old ploy and an easy one.

People in public office -- and CB members hold a public responsibility even though they are just volunteers -- surely understand that on really important issues the community is likely to express itself...bluntly. In fact, the community expresses itself furiously on utterly trivial issues. At least this one is truly important. If any issue could rise to the occasion of bluntness, this one surely would.

why should a small group who did not participate in the process be allowed to derail a process that will protest a much larger area and different racial groups.

It seems to me representatives of a smaller area, and a singular ethnic background are stopping an initiative that would help a leger area and many different ethnic types.

To me that is racist.

It is not clear that the zoning will benefit anyone, but it is clear that it will harm Chinatown. This is the problem.

Nothing tall has been built in the EV in the last 5 years. All the out-of-scale development has been in the C6-1 zones surrounding it. Only a limited portion of those zones is included in the rezoning, and it may be that development has already been exhausted in that area.

The Community Board has not done its homework to find out whether there remain air rights available for further development in that area east of Forsyth. Until that information is made available, we don't know whether this rezoning will do any real good. It could be too late for that area.

When a protective rezoning comes down the pike, developers rush in to dig their foundations before the new rules apply. That's what happened in the area east of Forsyth.

Be that as it may, the crux of the matter is this: once the zoning is implemented, development will speed up on the boundaries of the protected area -- Bowery and Chinatown.

In other words, excluding Chinatown was an error. The rezoning, without Chinatown included, will actually harm Chinatown. The Coalition is basically saying that Chinatown should not be sacrificed for a rezoning that will protect an area that may not need protection anymore.

The board claims that it couldn't include Chinatown because the zoning was already large (although it is not the largest zoning undertaken by DCP).

As reported in the Villager, this rezoning arose from the EV. It was first proposed by EVCC -- as the name implies, an EV group -- with no thought of Chinatown.

The history goes back to the struggle to save Charas, which is deeply embedded in the politics of the EV. The funding for it came from the EV. Margarita Lopez got $50,000 for it -- her district is the EV, not Chinatown.

This rezoning was about the EV from the start.

You repeat that the Coalition came late to the process. But, you see, this was not their fault. Chinatown was left out of this process. This has been repeated for your benefit with no effect.

You seem intent on blaming the victim -- and now you are using the "racist" epithet.

Whether they will stop the process remains to be seen. I doubt it. DCP has spent its 2 million and lined up its support. If the proposal fails it will be because the mayor (who controls DCP) prefers the area to remain under current zoning, not because of anything the Coalition says or does.

Community resistance didn't stop the 125th Street rezoning or Columbia's expansion plan. The city is not sensitive to communities.

It is my hope that out of this process some protection for Chinatown will emerge. That depends on Gerson, most of all. But he may as well be in Siberia.

The first step now has to be to find out whether the EV and the area east of Forsyth are in real danger of further development. Without that information, we are all grasping and fighting and bickering in the dark.

But even if there is danger, the advantage of stopping the process is that, by making the entire neighborhood dependent on what happens to Chinatown, everyone is in the same boat and working for the benefit of everyone -- no one gets a protective rezoning unless everyone does.

That's the opposite of racism. It's same boat unity. It's the ideal goal.

Maybe this will make more sense:

Your landlord comes to you saying, "I struck a deal with our neighbor. His apartment will remain affordable and he will never be evicted. There's nothing in the deal about you, though, so in order to recoup the losses of this deal, I'm evicting you."

You reply, "I don't want to be evicted!"

You say to your neighbor, "Why didn't you tell me you were making this deal?"

N: "It was between me and the landlord."

You: "But I'm the one who's going to be evicted. I'm going to protest to the landlord!"

N: "If you protest, then I might lose this great deal."

N: "Now, now, you won't get anywhere calling me ugly names. It's too late to protest now. You will just ruin it for me, and this is a very sweet deal for me. You should have gotten involved in the process earlier."

You: "But you didn't tell me you were striking a deal to sacrifice my apartment for yours."

N: "You are so selfish, coming along at the last minute, trying to ruin my wonderful deal that I worked on for five years, using all sorts of influence and spending money that you, frankly, don't have."

Make sense now? It's a rotten situation, a real quandary. So let's not blame the victim. Let's try to do our best to protect everyone in our district who needs protection and who can be protected.

Should the rezoning be stopped? I don't know the answer to that one.

Do you have the statistics on current air rights in the area east of Forsyth?

When you think about it, it's uglier than any name-calling. It amounts to saying, "F*ck Chinatown" and actually doing so.