I guess everyone involved in Chinatown affairs has an opinion on whether Chinatown should build a gateway arch. I guess knowing a few of those opinions is a sure mark of contact with Chinatown discussions. Perhaps there already is a gateway arch in Chinatown. It is intellectual and interactive, and you don't know that you have walked through it until you find yourself on the other side of it. Chinatown's gateway arch is a discussion: the discussion of the arch. Once you find that you have an opinion on it, you suddenly discover that you've walked into a place you hadn't been before, or if you'd been, you hadn't quite seen it from this angle.
:-)

People disagree on where this arch -- I mean the physical one, now -- should be located and what it should look like. The benefits of proximity to the arch might unfairly favor near businesses over far, and there's little agreement on whether Chinatown's image should recall old-country traditions or the uniqueness of the new or both. There's even disagreement whether it will be good for Chinatown at all: all the dying Chinatowns in the US have arches; Manhattan's live Chinatown alone doesn't. If it aint broke...

Of the proposals I've heard, one of Wellington Chen's is most appealing and smartest: a hologram arch. It would create a tourist attraction that will draw commerce to Chinatown, won't consume space and could even span the entirety of Chinatown itself, encompassing all its locations. I can imagine that such a hologram arch -- maybe even a transforming hologram taking traditional features and melding into modern features in turn melding into futuristic possibilities, with elements drawn from the whole immigrant history of Chinatown: African, German, Irish, Jewish and Italian -- I can imagine that as a worldwide tourist attraction. It would be a financial bonanza for Chinatown, feeding cash every day in perpetuity, like the Eiffel Tower, as Wellington likes to say. It's an irresistible proposal.

But I have qualms about tourism. It's not monolithic, tourism. Tourists who come to Chinatown for Chinatown's authentic living character are different from tourists who come to see an urban technological marvel. The latter expect to eat American fare, preferably MacDonalds, but Wendy's will do too. They might venture into a local restaurant, but only if the menu isn't too threatening. I'm fine with Empire State Building tourists at the Empire State Building, or Statue of Liberty tourists at the ferry -- there are no neighborhoods to destroy there. Chinatown has to consider which tourists it wants and how to get them.

If the goal is to attract tourists to Chinatown for its authentic living character, and not for a convenient concentration of MacDonaldses and Wendy'ses and a handful of Americanized "Chinese" restaurants, why have any arch at all? How does an arch enhance the lived character of the place?

I feel the lack of a symbol for Manhattan's Chinatown. Is there one? Its landmarks are urban and American -- rows of tenements built for Irish, Italians and Jews, a park with a Calvert Vaux pavilion, a bridge entry with a grand and grimy Beaux Arts Carrere & Hastings entrance, a bank designed to match the classical Beaux Arts bridge, minus the grime. There's Confucius and there's Lin Ze Xu, but neither one is specifically Manhattan's Chinatown nor expresses the relation of Chinatown to Manhattan. Kim Lau comes closer and should be better known, but to try to make it better known would be a task akin to lecturing a class of students who just want to get out and play.

The most distinctive image of Chinatown for me is the bright chaos of flying banners posted along Pell Street. They are a favorite among photographers. Flickr is rife with Pell Street shots. Go look. It says so much about Chinatown: that it is lively, busy, commercial, bright, welcoming, distinct from the rest of the city yet distinctively urban and New York in character.

All the most memorable images of Chinatown are of its streets and streetlife. It has no Chrysler Building, or Upper West Side grand hotels or Upper East Side marble museums, or East Village Tower of Toys (and now the EV has lost that too) or lamppost mosaics, or Greenwich Village townhouses. It does have roast ducks in picture windows, sunday-in-the-park ensembles of erhu, flute and yangqin surrounded by trees, their low branches hung with the cages of exotic song birds, and a narrow, winding street dour in its presence and darker in its past.

The discussion of the arch seems like a red herring to me. The image of Chinatown surely should be sought in what Chinatown is, not in creating what it isn't or conforming it to other places. If character shall be destiny, that creation or conformity can only lead away from the true path. But what do I know? I'm an outsider.

Maybe the funds for the arch should be devoted to finding an image for Chinatown drawn from Chinatown itself. A fauvist silkscreen of Pell Street banners?

Instead of a Chinatown arch... 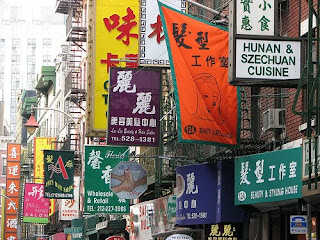 An archway while historically a welcome gate into a community, also serves as a boundary marker to which new york chinatown has no boundaries and should not have any. Besides... gated communities are so anti-new york.

additionally, the idea of a arch makes chinatown look too kitsch, and too much like every other us chinatown (with archs) none of which approach the complexity of new york's.